We were up early today and headed for Franconia State Park. We wanted to see The Flume Gorge. From one of the reviews: The Flume is a natural gorge in Lincoln, New Hampshire. It's over 800 feet in length, and the walls reach upwards to 90 feet. There's a two mile loop from the Visitor's Center that brings you along river beds, waterfalls, rocky cliff sides, enormous trees, and more. 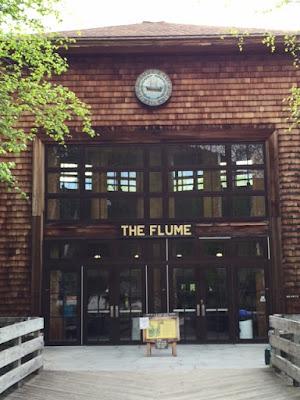 There was some easy hiking. 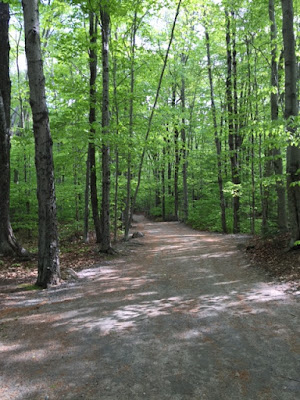 And a covered bridge along the boardwalk. 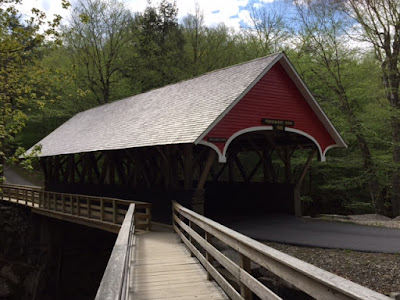 This was the river under the bridge. 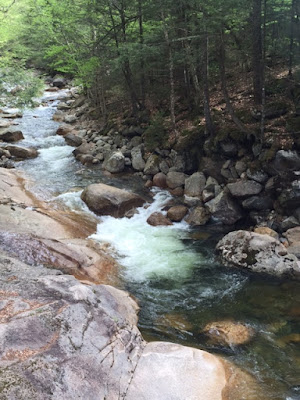 The boardwalk took us higher and there was more water coming down over boulders. 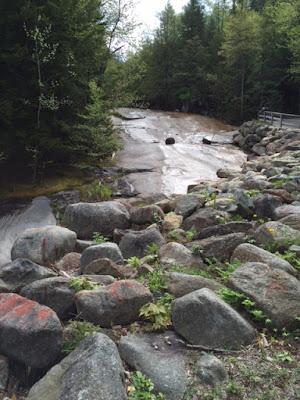 Every so often, well actually quite often, my favorite photographer was in action. 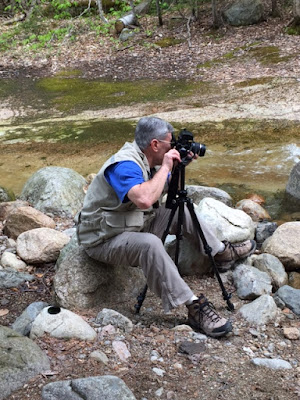 Here we are on our way up to the Flume. 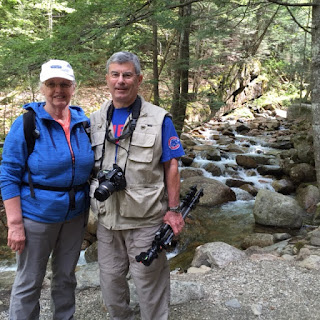 Here is the boardwalk as we entered the narrow part of the Flume - it still was over some land. 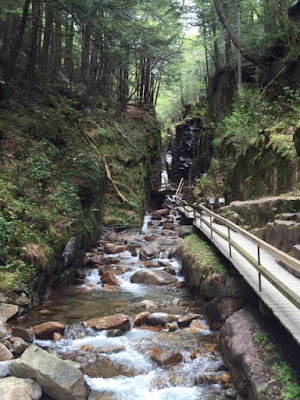 And now you can see how the boardwalk is hanging out over the water. 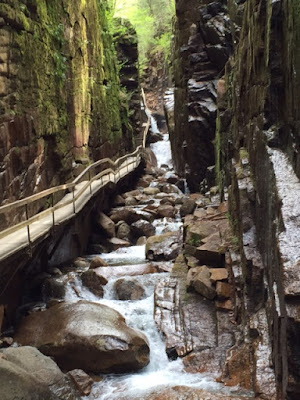 The steps are kind of out over the water too. Oh yeah, I was out of my comfort zone! The steps continued on and on ... 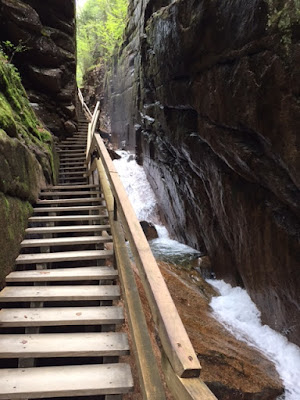 But it was worth it. Avalanche Falls was impressive. 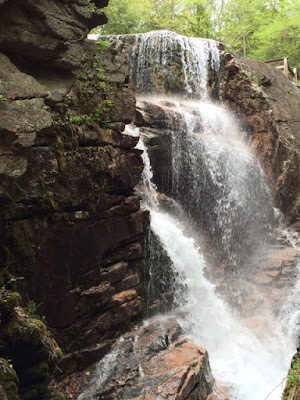 And then more 'free-hanging' boardwalk... 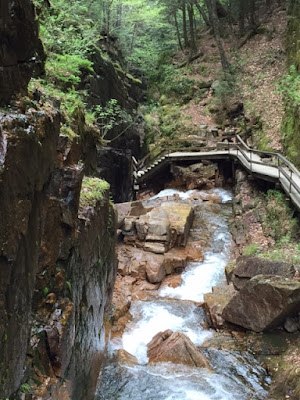 And another shot of Avalanche Falls. 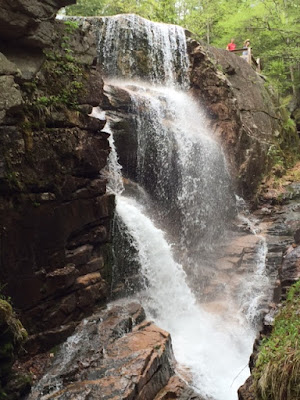 At last, we were near the top. We didn't enter Bear Cave and we didn't see any bears. 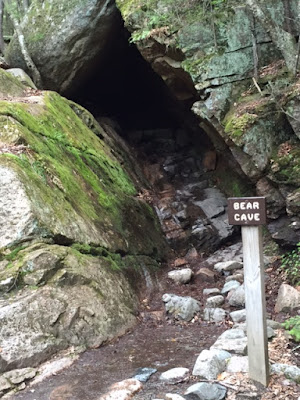 We were at the top of Avalanche Falls 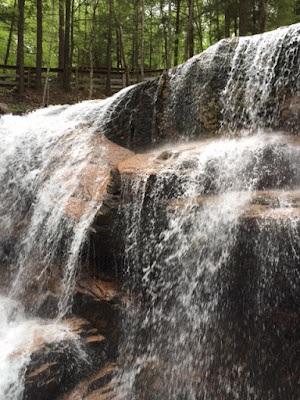 and crossed over to the other side. 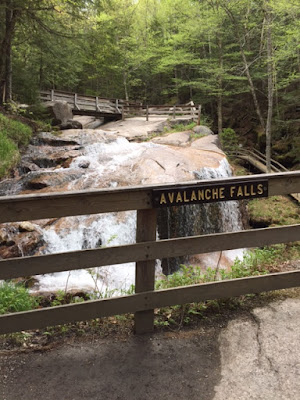 The hike down was a little longer but most was on even ground. 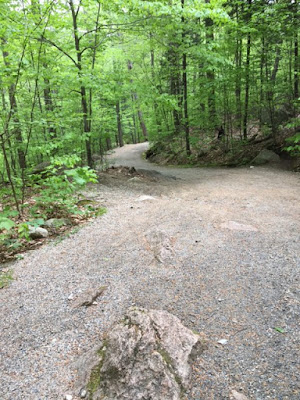 Right after we crossed this water, Ray said he thought he'd felt a couple of raindrops. 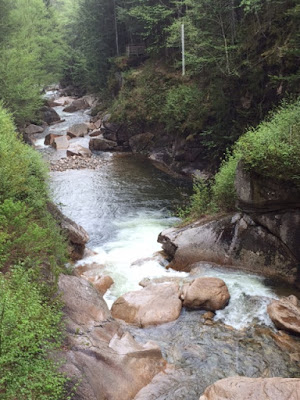 Within a couple of minutes, we were in a major downpour! And it didn't stop. I had both of our raincoats in my pack and it didn't take us long to get them on. As we continued on, we stopped at one rain shelter for a few minutes and then made it down to the pedestrian covered bridge. We were there quite a while visiting with a couple from Maine. I felt bad for them since their rain gear was in their truck in the parking lot. We finally decided that the rain wasn't going to let up so we kept going. We didn't take many photos once the rain started but I did take this picture. A short time later the clouds were covering most of the mountains. 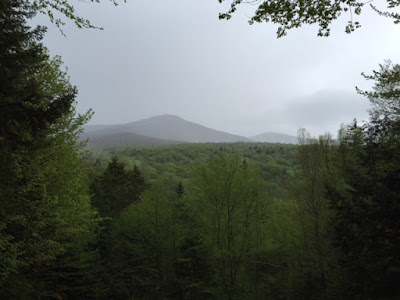 We headed into North Woodstock and had lunch at the Cascade Coffeehouse & Cafe. Another day with some local root beer! 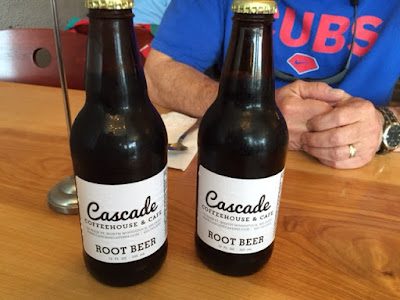 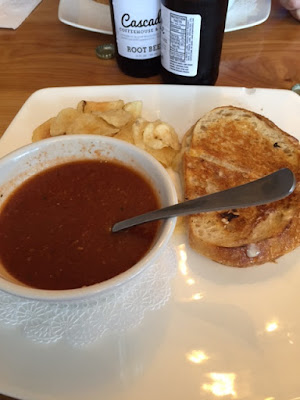 In case you missed it, I had my backpack on - I was a real hiker today! My iPhone says I climbed 27 floors today and have way over 10,000 steps - it was a great day. 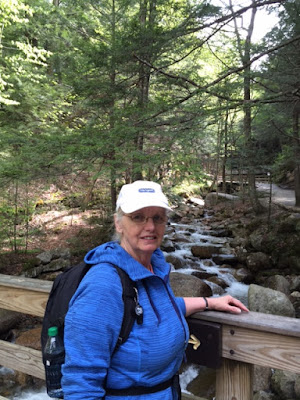 We are home and getting things dried out. I have rested my ankle and am doing well.

Tomorrow we plan to drive the Kangamangus Highway - actually there is a loop that we hope to do. We'll be heading out early - there is lots to see!
at 8:50 PM

Glad to hear that your ankle tolerated the hiking in the Gorge. I'd never heard of it before, but I can see why you made sure to visit it.

I am NOT a bridge person so the 'suspension part' was spooky but it's often a little rewarding to go outside one's comfort level and this was no exception! ~Jeanne

Funny, I'd thought of having grilled cheese & tomato soup the same day (I didn't). Glad your ankle is getting better. Lovely scenery.