Vince's Restaurant in Monroe, WI emails a joke of the week every Wednesday. I thought this was a good one - maybe I'm just a bit giddy tonight - I hurt all over too!

I just finished a couple of things today. Keeping busy is a great distraction for pain!


First are a couple of mug rugs. They are about 6 1/2" by 9". Just the right size for a mug and a couple of cookies! I've seen pictures of lots of these and just had to try making a couple. 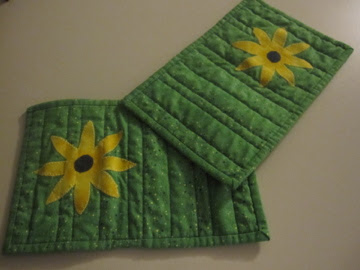 On the way home from my stress test, a week and a half ago, we stopped at The Quilt Trunk and I bought a kit for a table runner. Well, when my body feels great, my mind doesn't always work and when my body hurts, my mind works less! This isn't exactly how the kit was supposed to look but it is similar.

This picture might be a bit out of focus - sorry about that. 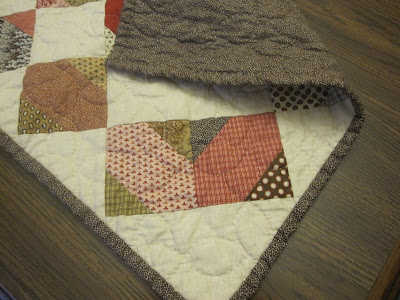 I'm ready for the surgery. It might be a while before I get back to this blog but when I do, I expect that much of my pain will be gone! ;)
at 8:43 PM No comments:

A while back Grandson Mack got a new pillowcase and stepped into it thinking it was a sleeping bag. After I saw a picture of him in the pillowcase, I talked with him about it on the phone and asked if he needed a sleeping bag and he said "Well, yeah!". I decided that would make a good birthday gift.


I did research. I drew pictures. I figured out yardage. And I began. My idea was to make a quilt about 60" square. Then I would fold it in half and put in a zipper. Of course I made a prototype - if it turned out, I'd give is to Mack's little brother Griffin.


So I made a quilt and then the second quilt. No problem at all!


Then I put the zipper in the prototype. First side fine! The second side ended up 1/2" short. Ripped that out - all 70 some inches of it. Second try it ended up 2" too long! Ripped that out. Then I used hand-basting instead of pinning. Third time was a charm!


I used what I learned and started the "real" sleeping bag. First I measured from one end of the 100" zipper so the second bag would be just like the first. I hand-basted both sides of the zipper - it went in beautifully. BUT the two 100" zippers in identical packages were not both 100" long! One was 4" longer than the other! Of course I found this out AFTER I put in the second zipper. So I ripped out both sides and started over once again.


The top borders of the bags went on and were quilted without any problems.


I also made stuff bags - took a little figuring but they turned out fine. The inside is a soft flannel. Would I do it again? Well, not this week! 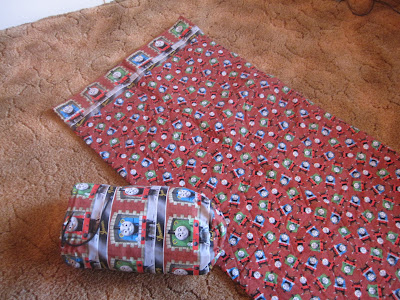 So tonight we celebrated Mack's birthday a little early since I will still be in the hospital during his party. He got right into his bag. 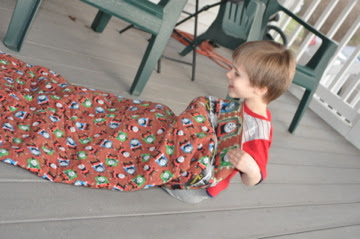 Griffin lay down on his! 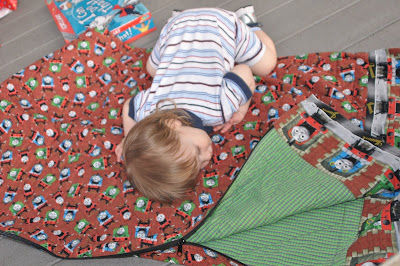 The letter came today. It said:


"You have recently completed a nuclear perfusion stress test ... the scan is performed in conjunction with your stress test was interpreted as being normal..."

I finished some small quilts that remind me of spring. I had a kit for a large wallhanging but decided I needed something for my 3-part hanger. 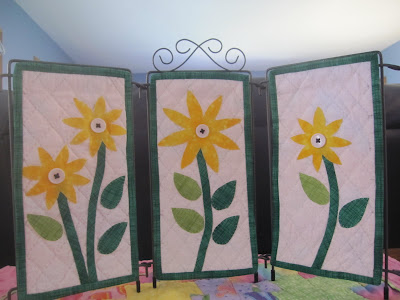 Then I decided to make something coordinating
for the 10X12 hanger. 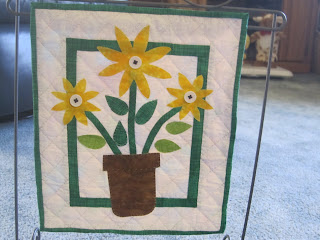 The last couple of days have felt like spring -
I'm ready for more!
at 5:07 PM No comments:

Pie in a Jar

I've seen these on the Our Best Bites blog and just had to try them. So a while back I ordered the squatty 1/2 pint jars.
I decided I had to use prepared pie crust if I wanted to make them now. They really were not much work since all the fruit was ready in the freezer.
Here are some apple pies with crumb topping.
They are unbaked and in the freezer now. 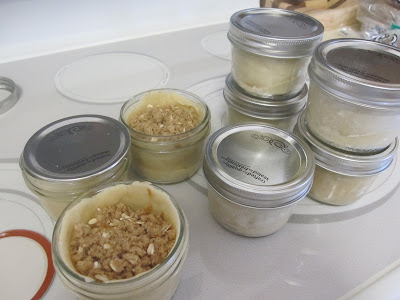 We have a couple of peach pies 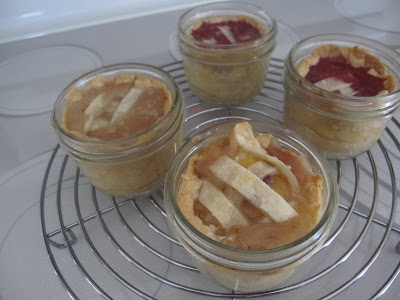 and a couple of raspberry peach pies. 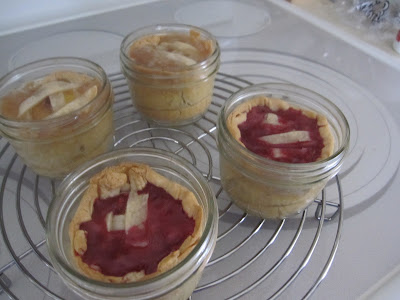 On our way home from Madison today, we were traveling cross-country on Irish Lane in Fitchburg when we saw "The Quilt Trunk" quilt shop. We just had to stop!


It opened 2 months ago and is small but growing. They specialize in Civil War reproduction fabrics but also had some other fabrics. The owners, mom Linda,  and daughter Ruthie, were interesting to talk with as was the dad. Ruthie is pregnant with child number 6!


I bought a table runner kit with an original pattern by Ruthie. 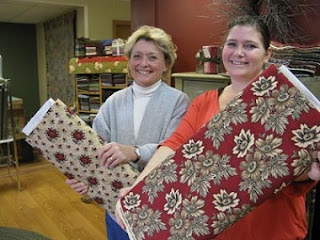 I didn't think to take any pictures so I borrowed this from Fitchburg's online newspaper.
at 6:34 PM No comments:

I had my stress test today - a nuclear stress test or to be exact, a Sestimibi Stress Test.


In case you are interested:
"A Sestimibi Stress Test is a diagnostic xray study that uses a radioactive tracer, called sestimibi, or cardiolite, to create pictures of the heart muscle. When combined with stress either by exercising or by use of a medicine, the sestimibi scan helps determine if the heart muscle is getting enough blood.

A Sestimibi Stress Test consists of two parts, rest and stress:
So I got the tracer by IV, had the scan in the 'donut' machine' with the gamma rays, then managed the treadmill (YES!), got more tracer during the treadmill part, then another scan. It really went quite well and I was able to get my heart rate quite a bit above where it needed to be. It all took 2 1/2 hours so Ray got lots of rest with little stress! I guess I am still a little radio active tonight - maybe I'll glow!


Hopefully we'll get the results on Monday.


Oh yeah, one of the three people working with me was a UW-LaCrosse graduate! Our Alma Mater!

I had a number of appointments in Madison last week - the surgeon, lab work, a physical, more x-rays, an ECG and my brace fitting. We just got back from another trip. This week was Spine Education Class. I now know how limited my BLT (bending, lifting, twisting) will be for the next many months and I know my restrictions. Last week was painful - I think there was too much going on. This week, my pain is mostly from the car ride. We should be on cruise now until the surgery - NOT! (patience, patience, patience)


I didn't pass the ECG last week ???! It was borderline abnormal; maybe that's just the way I am! Anyway I now have to endure a Stress Test. They couldn't do it yesterday or today so we will be going back one more time before surgery.


And starting tomorrow morning, I no longer get to take my pain medicine - time to start getting ready for surgery.