Here are just a small number of the gorgeous quilts that were at camp. 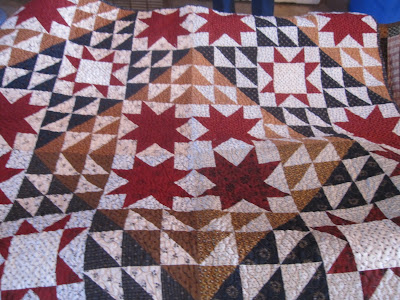 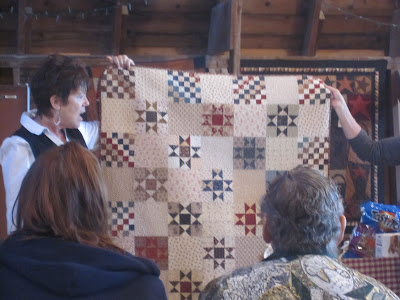 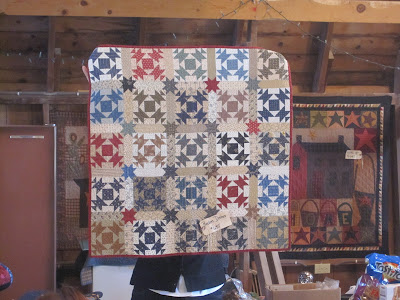 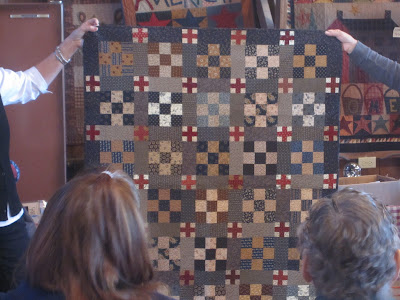 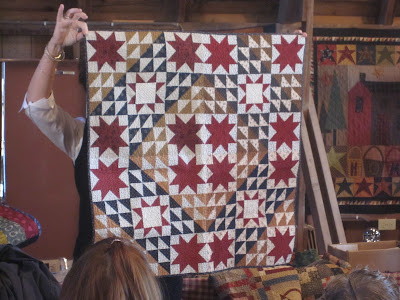 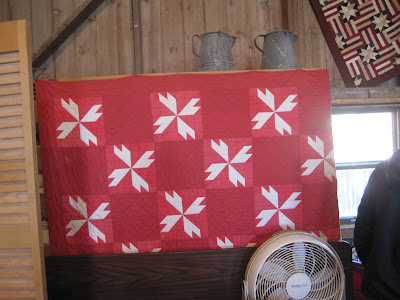 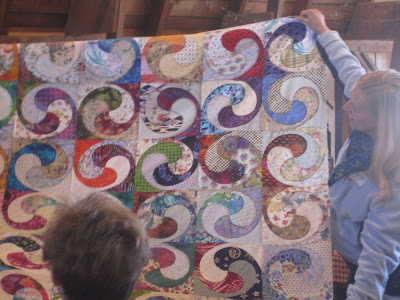 My back is giving me some grief so I'm a little slow at posting things...

Sandy, Barb, and I left home around 8 AM. Lots of luggage and sewing stuff! We will meet friend Polly at camp.
First stop was the Vineyard Gift & Quilt Shoppe in Independence, Iowa. 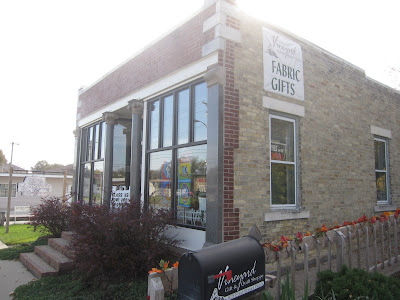 This used to be a monument place. The train went by and the monuments were put on it. There are still monuments in the backyard - they came with the place! The inside has a tin ceiling and tin on the walls. The shop owner and a couple of ladies who came for coffee were very friendly. The coffee ladies were really interested in my Keen sandals??! And they were not quilters!
Still in Independence, we headed down the street to Quilter’s Quarters. 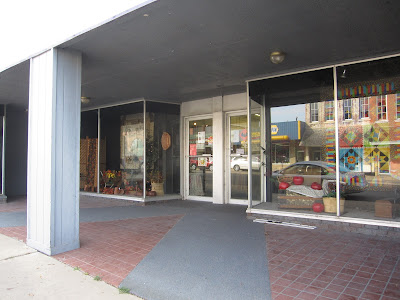 Their name doesn’t seem to appear anywhere outside of the store so they are rather hard to find. It was a nice store with lots of fabric. While there, we met some women going to Desoto, Wisconsin on a quilting retreat. They rented A Place To Quilt. They will do their own cooking and will not have a fabric store where they are staying so they were shop hopping all the way to “be ready”! They seemed to be a fun group.
After lunch in Waverly, Iowa, we found the Moose Patch Quilt Shop. 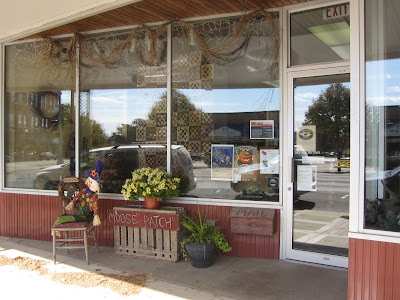 It was a cute little shop with a very friendly clerk. The lady who owns the shop also owns the Sew Dear pattern company. There is a month long shop hop going on and the Moose Patch is on the hop. The store in Greene was also on the list and the clerk told me to be sure to go there.
Not far from Waverly, we stopped in Nashua at The Little Brown Church in the Vale. 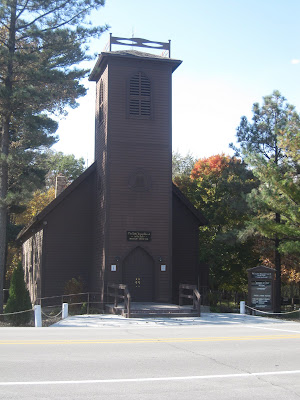 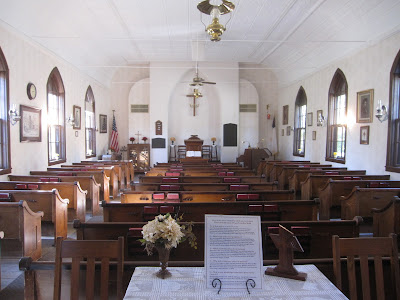 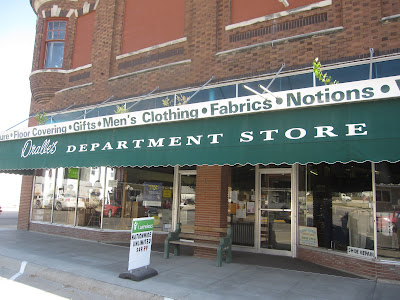 It was fun to see. We met and were welcomed by Jeff Dralle. This store has been in the family for 5 generations. Jeff told us some of the history and gave each of us a pot scrubber.
The quilting area was in the upstairs loft. 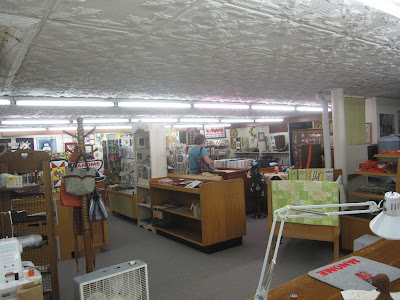 LOTS of inspiration. This is definitely a place I’d like to return to - it was my favorite shop of the day! We were told to go to the department store in Garner - we didn't know there was one!
After checking into our motel, we headed downtown to Mat’s Bar for dinner. Then we had to stop at Dollar General - tradition, you know!

We shopped in downtown Garner at a very nice department store - Goodnatures.  Then to Alco  Discount Store - kind of a cross between Farm ‘n Fleet and Kmart.
While we were shopping, Ray called and told me of Sue Elliott’s death this morning - so very sad. Sue, a wonderful lady that I quilted with, was battling and beating cancer so this was really a shock.
Around 11 we went to Country Threads. There was a darling new playhouse. 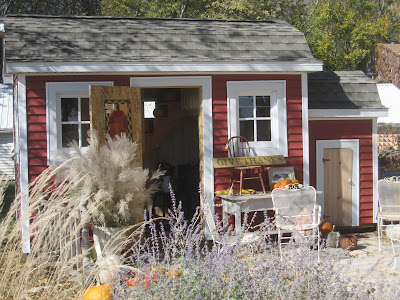 In the main part, there is a loft with a stairwell. The little room at the right is a secret room. Oh what fun children must have playing in this while their moms shop in the Chicken Coop! 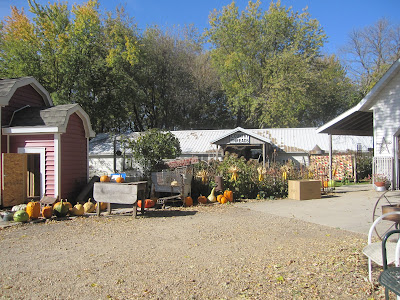 We met the other campers. It was fun to see old friends and meet new ones. Campers were from Arkansas, Colorado, Iowa, Illinois, Minnesota, Missouri, Wisconsin, and Texas.


At noon we moved into the barn. 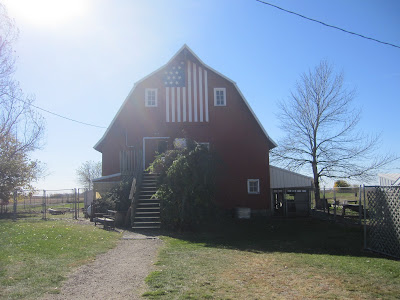 Bob (Polly’s husband) carried my sewing machine up - I could kiss him! Instead I bought their dinner.
I worked on Halloween treat bags first. Then I chose fabric and began a quilt.
After dinner in Clear Lake, we went back to camp and sewed until 10 - way too long for me with the sciatica pain in my leg and back. I may decide not to go back to the barn tomorrow night - I’ll see if there is something I can do in my motel room.

It was very cold in the barn this morning - Slowly stripped off layers of clothing as the day wore on. Great day of quilting and inspiration.


We were invited to Connie’s (one of the owners) house to tour her quilting studio. VERY NICE! She is also quite the decorator and loves Halloween.
I decided to return to the motel after dinner and rest. I trimmed some pieces and figured out what yardage I still needed.

We stopped for coffee and hot chocolate on the way to camp this morning. It wasn’t as cold in the barn since the fans were turned off and the windows and doors were closed last night.
I got my fabric for the borders, binding, and back of my quilt.
Country Threads brought in lunch from Subway today. We enjoyed it in the barn along with Klondike bars.


It was a very productive day of sewing. My quilt top is together! 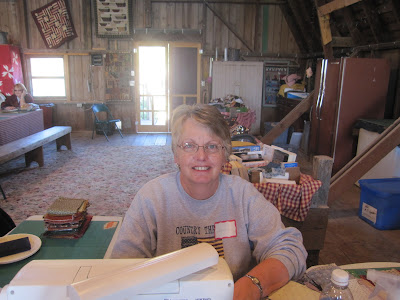 We had dinner at Mat’s Bar. Then I once again returned to the motel. Tonight I pinned one section of my quilt.

We packed up and checked out of the motel then again stopped for coffee and hot chocolate.
It was Show and Tell time at camp. It was fun to see what everyone did during the week. Then it was time for one last shopping trip in the store and to say goodbye to old and new friends.
On the way home, we stopped for lunch and to get supplies to make light boxes.
It wasn’t the best week for me because of sciatica pain. But I did have a really good time thanks to my friends. With their help, it was a great week.
at 8:23 PM 2 comments:

We are still here - but feel a little like our lives are out of control!

This insulation project seems to have taken on a life of its own! The inside insulation upstairs is done. All three rooms are painted. Two of the four dormer closets are painted. The other two closets need drywall. We are slowly moving back upstairs. Most of the cleaning of stuff is done. We have lots of stuff to give away. Now the rest of the story...

I leave Monday for Quilt Camp. I return on Friday and we leave for North Carolina on Sunday. Not sure when we will be home. Sure hope we are cleaned up around here by Thanksgiving! Things just happen around here, not always planned but always interesting!

Here is a little reversible vest that I recently finished. 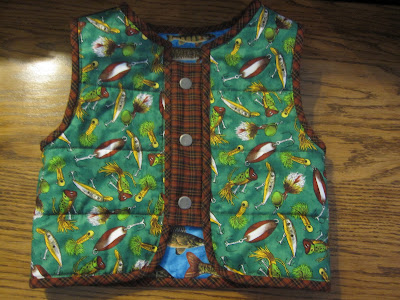 The pattern and the fabric are from the shop in Bayfield, Wisconsin. The pattern is by a local resident. 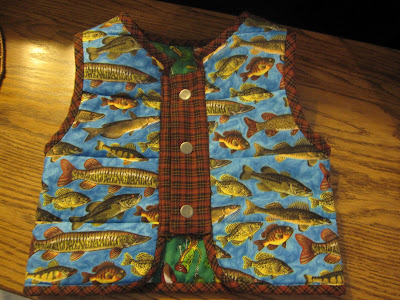 And I just had to try one of the hot dog or sausage pillowcases. Very easy and quick to make. 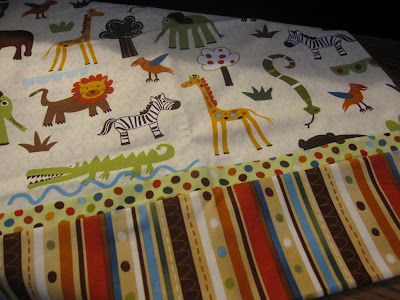