I've only been sewing a little here and there but I actually finished Batik Bowties! Making use of some scraps, I used the blocks as a leader/ender project last year so all I really had to do was sew the blocks together and quilt it. 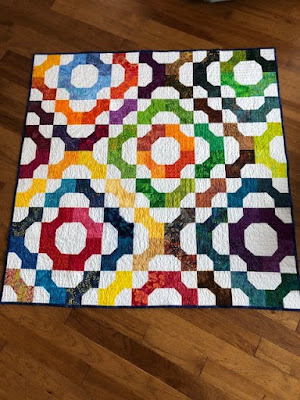 The layout is similar, I think, to a quilt I once saw. It's a variation of what I remember anyway. I tried to group my bowties by color.

This donation quilt is 55" square. The back is a blue dot grunge but I reversed it so the dots are on the inside of the quilt and what shows is more plain. 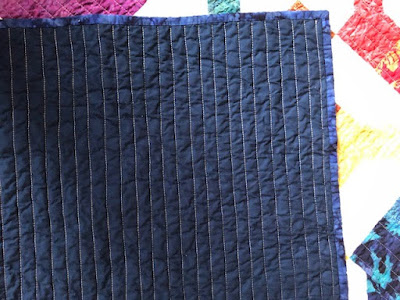 Before the quilt was pieced together, I knew I wanted to quilt it in straight lines with a walking foot. I do love when the quilt tells me how it wants to be quilted early on. I used Aurifil #2600 Dove Gray thread to do the quilting. 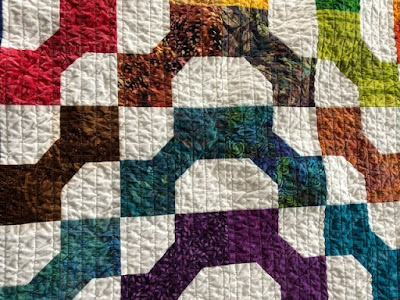 When I first washed the quilt one of the colors ran (you may be able to see it, it's the brown on the far left above) - it's hard to believe that has now happened to two quilts in a row when I usually don't have one a year. I used a color catcher too. Anyway a little Dawn dishwashing soap and another trip through the washing machine took care of it.

Ray is slowly progressing. We'll see the surgeon again next week and hopefully get some answers as to why he still has shooting pain at night.

I'm having some problems with food allergies. I have a severe allergy to broccoli but something else is giving me fits. The reaction isn't as bad as for broccoli but I feel blah most of the time along with some other symptoms. I'll see the allergist near the end of February. In the meantime, I'm trying to track down the culprit(s) and cut them out of my diet. Now you know why I haven't done much quilting. So far I'm doing better today.
at 9:08 AM 3 comments:

Accept what is,
let go of what was,
and have faith in what will be.
-Sonia Ricotti

I wasn't sure there would be another finish in January but I made it with time to spare! Six Degrees South North of the Equator is finished and in the donation pile. 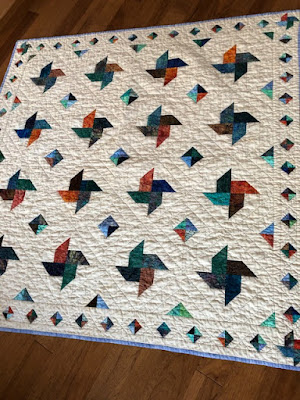 I wrote about this quilt here last October. Since I really changed the pattern (because I goofed), I decided to change part of the name from South to North.  The quilt is easily 180 degrees different than the original which you can see here. 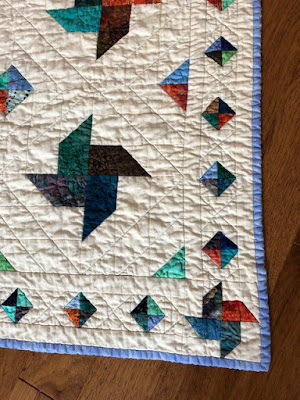 This quilt is 56" square. I used my Juki ruler foot and oh, what problems I had. I just could not get it adjusted to sew right. After a number of hours and much ripping out, I finally gave up and used my Bernina with its ruler foot. I quilted straight lines using the rulers and then free-handed a spiral in the center of the colored pieces. I used light blue #2715 Aurifil thread for the quilting. 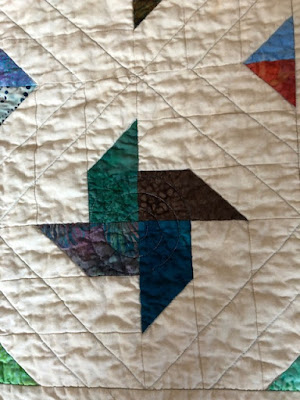 The background on the front is a tea-dyed cotton and the colored fabrics are batiks. I had some problems with a couple of the batiks running when I washed the quilt but it is all okay now. The backing is a light blue cotton. 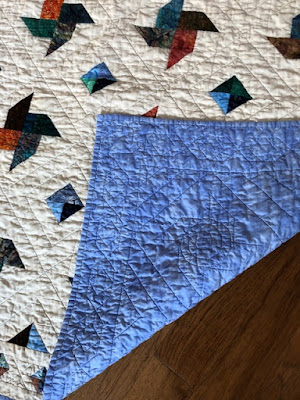 Now I just need to find time to play with the Juki ruler foot. I'm sure the foot is fine and that all of my problems are of the ID-ten-T type. I'll master it one of these days.

Ray is making progress. His estimated recovery was changed from 3-6 months to 6-12 months. It seems that his shoulder/arm muscles adjusted to the rotator cuff tear for 18 years and now they aren't too anxious to relearn how they are to behave. He isn't sleeping well yet but he is driving and  doing more. He has pretty good range of motion but he is really missing strength. With time and lots of exercise, he should be as good as new in a few more months.
at 8:11 PM 3 comments:

First Finish of the Decade!

What a wonderful thought it is
that some of the best days of our lives
haven't even happened yet.
-Anne Frank

I haven't had much time to sew but now that the holidays are past, we are settling into a routine of sorts and I have spent a number of hours over the last few days quilting. Fun!!! Maybe this will continue.

I used solid fabrics for Crosswalks; all were scraps. Yes, I'm still trying to get my scraps under control and I might be making a little progress.

Crosswalks is a donation quilt and is about 55" square. The pattern is from Missouri Star Quilt Company.

I free-motion quilted this using rulers and Aurifil #2600 Dove (gray) thread. I quilted a straight line through the middle of the colored stripes and a star in each white square.

In the outside triangles, the star only has 3 points and extends into the white border. I added a line of echoing around the outside. Do you like the binding? I thought it looked great with the stripes in the crosswalks.

The back is from my stash.

Ray is making progress. He still has trouble sleeping. The shooting pain has lessened but is still there at times. He faithfully does his exercises and is getting stronger and more independent daily.

I put some gnomes on a sweatshirt because I like gnomes.

I finished the bowtie quilt top. So now there is one quilt waiting to be sandwiched. 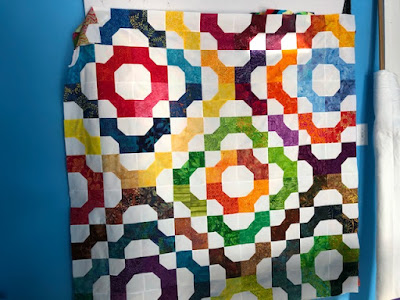 I have a string quilt top together and I need to add borders. 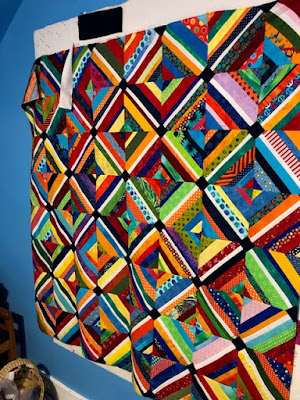 I have a courthouse steps top that needs borders.
And then I decided to clean out my orphan and extra block basket as if I could.
I'm sewing pieces together to make blocks.
I have a plan in my head - we'll see what develops.