Jenny's Flower Garden Too is finished!

Be thankful for what you have;
you'll end up having more.
If you concentrate on what you don't have,
you'll never, ever have enough.
- Oprah Winfrey

I'm taking a short break - we're having Thanksgiving here.  Everyone is helping and all is pretty much in order, I think!

When I first saw a picture of the original quilt, it was called Jenny's Flower Garden. The quilt's artist was not named so I have no idea who did the original design. I did make some modifications to the design - the main change is that I left off the braided border. To give credit to whoever the original artist is, I am calling my quilt Jenny's Flower Garden Too.
This quilt is about 62" square and a donation quilt. I used batik scraps for the colors and the white/neutrals. The border is batik yardage from my stash - but there wasn't enough for the binding. The backing and the matching binding are a light blue water spot cotton that I had in my stash. 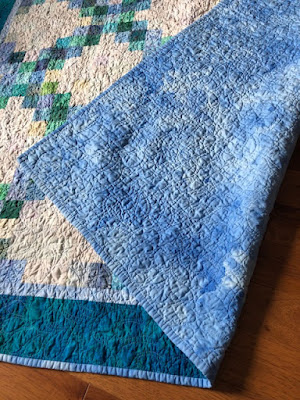 I free-motion quilted this quilt with a motif called loose feathers. I love the swirl look when I made a directional change. 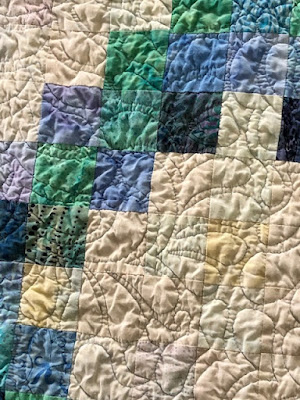 I used #2715 light blue 50-weight Aurifil thread. This quilt has a lot of quilting but with the Dream Cotton batting, it is soft and drapes nicely. 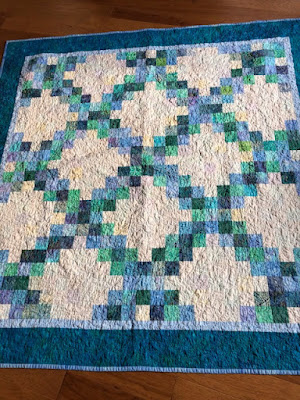 Some finishes and more...

In the end, everything will be okay.
If it’s not okay, it’s not yet the end.
-Fernando Sabino

Ray's recovery is progressing. It's becoming more challenging as he is incurring more pain when his arm is lifted higher. The CPM machine lifts his arm; he doesn't. In a couple of weeks, he will begin using his arm and, sadly, I guess that will hurt more. He's a great patient and following doctor's orders. We'll both be happy when he is okay again.

I try to get into my sewing room for a few minutes most days. I finished this Scrappy Trip Around the World. It was my least favorite in the pile to quilt so I decided to do it first. It's about 52" by 72" and I actually like it now that it's done! I took pictures outside today - the temperature was in the 30s with wind but, at that moment, we had sunshine and no snow!

I free motion quilted this with a meandering stitch using Aurifil 50-weight thread, #1103 dark red. The quilt has Dream Cotton batting. The back is a blue with a small off-white dot that was in my stash.

This donation quilt was made from some 2 1/2" squares left from my scrap cleanup in May, 2018. The dark red border is left from a grandson's quilt that I made  in November, 2017. I've used that red in a number of projects but now I think I only have about a 12" square left.

I began this wool project early last spring. As much as I used to enjoy hand stitching, my old, arthritic hands just don't like it as much anymore. I'm glad to have this one done.

I picked up a pattern from Christina Cameli for some Quilted Nesting Buckets. I enjoyed making these yesterday - they are quick and easy. Christina has you draw rectangles on fabric and then you free motion a different design in each one. Each area becomes a bucket.

Here are my buckets:

They nest nicely. You can see the gray lining in this photo.

I've spent some time trimming my blocks for the Crosswalks quilt again! The instructions from Missouri Star doesn't have you squaring up the blocks but I decided I should. For some reason, I used the diagonal connecting the two white corners to square them. After I was done with ALL of the blocks, I began to sew them together and realized my mistake. The blocks should have been squared up on the center of the colored strips. Notice the chalk line where the white arrow is pointing. The end of the chalk line should be the corner.

I didn't take any after pictures, but all of the blocks are now squared up the RIGHT way!

Our high school football team coops with a team just across the border in Wisconsin and they play in a Wisconsin conference. For the first time in history our high school has a State Championship team! It's been an exciting season and we are so grateful that the games have all been on a streaming radio station. The championship game was yesterday and a real nail-biter.

We live in a village (a very small town) that enjoys celebrating the accomplishments of our youth. The parade bringing our team home last night was incredible. We had firetrucks, police cars, ambulances, and lots of cars and trucks accompanying the team and the cheerleaders. We watched and cheered from our front porch.
at 9:35 PM 3 comments:

Recovering and a Fall Retreat

The best and most beautiful things in the worldcannot be seen or even touched - they must be felt with the heart.Helen Keller

Ray is recovering. He is using a CPM (continuous passive motion) machine for 3 hours a day that moves his arm. His arm fits in the area shown by the white arrow. His hand sits on that black ball thing.

He also uses a Cyro Cuff (an ice machine) for 3 hours a day. The blue cuff where the white arrow is pointing, sits on his shoulder and wide straps wrap around his upper body for stability. Ice water is pumped through the tube into the cuff that is covering his shoulder.

He also has about 1 hour of exercises a day. So he is busy 2 hours and 20 minutes three times a day. Then we also have doctor appointments and physical therapy which are about 35 minutes away. Of course everything takes longer especially since he is right handed and this is his right shoulder.

There is lots that go on each day but the days all feel very much alike - Ray says he is living Groundhog Day - did you ever see the movie? The PT is painful at times but he's handling it well. Sadly, we have been warned that the PT will be harder when he quits wearing the sling.

We did have some fun when Ray wore the shirt I made for him to visit his surgeon, Dr. Sathoff. The doctor couldn't quit laughing - he said it made his day.
Dr. Sathoff has done three surgeries on Ray so I listed them on the back of the shirt.
During surgery, Ray had a gown with a remote so he could regulate the temperature - it is supposed to aid in healing. He said it was really nice especially while he was waiting his turn in surgery.

Happily, things have changed tremendously since Ray had the same surgery on his left shoulder 18 years ago.

Our fall retreat (4 friends) was last weekend. It was only about 15 minutes away from me so I was able to  be there for three afternoons. Although not ideal, it was a fun break. My time was limited so I didn't take any photos of the great projects that the others were making. I did get a few pictures of my projects in the last couple of days at home.

I finished 40 more blocks for this quilt. I'm about half way! The scrappy log cabin squares will finish at 4" by 4".

I finished all of the blocks for this Courthouse Steps quilt. These blocks will finish at 12" by 12".

I made a few string blocks for this quilt.

I sewed for about a half hour each morning at home during the retreat. I worked on my Crosswalk quilt.

I have now finished all of the colored strips - just need to trim the strips, sew on the white pieces and trim into squares.

Lately, I've been trying to manage some of my smaller scraps. With four quilts, I was hoping to see more scraps disappear!

We are hanging in there and doing pretty good. Yesterday at physical therapy, I sat with a lady in the waiting room. Her husband has prostate cancer that is now in the bones. He was doing PT to help relieve some headaches/dizziness. She was telling me he has less than 3 years to live and his personality is already changing from the pain. The pain will only get worse. I was happy that I had 45 minutes to sit and talk with (but mostly listen to) her. I decided that there was definitely a reason I stayed in the waiting room for the first time - I think she really needed a friendly ear. I'll keep her and her husband in my prayers. As we left the hospital, I was counting our blessings.
at 11:33 AM 4 comments: